MESA, AZ (3TV/CBS 5) – A Mesa family is hosting a “Zoom the Room” virtual walkathon to raise awareness for NKH and money for gene replacement therapy research, which could be life-saving for their little boy. Click to Watch video of the story on AZ Family.

Lucas Culp was diagnosed with NKH, nonketotic hyperglicinemia, when he was 3 days old.

“When he was born, we really had no idea other than the fact that he was really sleepy and he didn’t really want to eat, and he didn’t want to open his eyes and he wasn’t crying a whole lot like he should’ve been,” said Chancee Culp, Lucas’ mother. 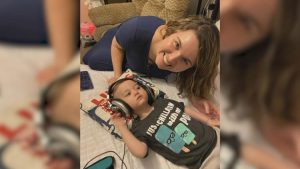 The rare genetic disorder is often terminal in newborns and many don’t make it home from the hospital. But Lucas had other plans.

“When he was 4 days old, we were told we wouldn’t be taking him home. We would have to be making a quality of life decision, is the way that they put it. And we refused to accept that. We told them they were wrong and the next day, he opened his eyes,” Chancee said.

Lucas is now 2 years old, but functions as a 5-month-old.

“He recognizes voices and faces and we do believe he recognizes some words and things like that but he can’t sit up. He can’t support his own head. He can’t feed himself,” Chancee explained. “He can’t walk or talk or do the things that a typical 2-year-old should be able to do.”

NKH doesn’t allow the body to break down amino acids glycine, and when it builds up, more problems will occur.

“It causes seizures, brain death. It overstimulates a part in his brain that is completely responsible for memory and learning, which causes him to be severely globally delayed,” Chancee explained.

Lucas’ family already practices social distancing and avid hand-washing, as the common cold has sent him to the hospital. Because of COVID-19, they are not able to hold their normal public events to raise money for the Lucas John Foundation, which primarily focuses on fundraising for gene replacement therapy research.

“The only way to cure any kind of genetic disease is through gene replacement therapy,” Chancee said.

Only about 500 kids in the world have NKH, and Lucas is one of two in Arizona.

“People just don’t realize, there’s no money in this. There’s no money backing this. This is all family-backed. We have to raise money ourselves. There’s not many corporations or research funds because there’s only 500 kids in the world with it,” said Brandon Culp, Lucas’ father.

In replace of a public event to raise money, the Lucas John Foundation is hosting a walkathon called Zoom the Room this Saturday, May 16, at 9 a.m.

“Jump on the Zoom call, there’s a registration fee, a t-shirt, just like any charity walk you would go and do on a Saturday morning,” Chancee explained. “We’re going to have some exercise people and some nutritionists and one of the researchers for the gene replacement therapy made us a video so to kind of tell our participants what we’re doing.”

The walking is optional, but there is also a charity auction and 100% of the proceeds will go to the Lucas John Foundation. 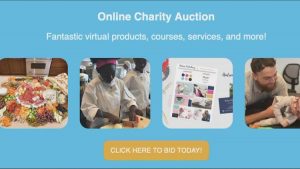 “Whatever you want to do, it’s mainly just congregating on a Zoom and trying to get as many people on there to have fun, support a good cause and have a good time, that’s really what it’s about,” Brandon said. “What we really need is awareness. I mean, I think everything else will take care of itself as long as there’s awareness.”